You can find a brief summary here. For more details we refer to our partner organizations in the UK and US.

Since a complete healing of Mucopolysaccharide Diseases is currently not possible, supportive and symptomatic measures are recommended. However, the symptoms vary greatly depending on the type and severity, the treatment has to be adapted to the symptoms of the individual patient.

Patients should be aware of the risks and side effects of anaesthesia for upcoming surgeries. An early bone marrow transplantation may alleviate the disease progression of two types of MPS (MPS I and MPS VI). A lot is expected from the gene therapy as far as healing of MPS is concerned. However, currently the enzyme replacement therapy is more likely to succeed.

As far as the musculoskeletal system is concerned, physiotherapy and in some cases orthopaedic treatment are recommended. Physiotherapy could alleviate or eliminate various symptoms. For example, the connective tissue weakness of Morbus Morquio patients could lead to strengthening the back muscles by massage and gymnastics. Stiff joints as in Morbus Hunter could be held back a little.

The orthopaedic treatment includes surgical and conservative measures. The aim is to prevent deformation and malposition of bones and joints and / or fix and stabilize already existing changes. Especially with Morbus Morquio for example the instability of the cervical spine can lead to spinal cord injury. Therefore the vertebrae bodies should be fused before signs of paralysis occur. Sometimes successes can be achieved by carrying out a decompression surgery without fusion, but it then may happen that the surgery has to be repeated after some years.

Worldwide there are only few doctors, who take up this issue seriously, who have specialized on these surgeries and already carried them out successfully. Unfortunately, it keeps happening that children are operated upon by inexperienced doctors, which often results in paralysis. We therefor strongly advise you to have a surgery as difficult as that be done in a specialized centre. Never forget the increased risk of anaesthesia for MPS patients!

For more information please contact the MPS Society Austria at phone number: + 43-7249-47795 or send us an email to office@mps-austria.at.

To allow the bone transplant to grow properly together with the skull base after the cervical spinal fusion, it’s necessary to keep neck and head steady in the right position for about four months (“halo”). Although caring for these patients isn’t easy, the children get used to this new situation fairly well.

In case of Morbus Scheie, Morbus Morquio and Morbus Maroteaux-Lamy, hip surgeries are necessary in the second or third decade. Because of the hip joint deformations, which are typical for MPS patients, hip joint prosthesis may be necessary at an early stage.

It is difficult to deal with neurological problems. Sleep disorders occurring in M. Sanfilippo are pressing challenges for the family. The use of medication may help, but they will bring about only brief and temporary improvement.
Seizures must be treated with medication (mainly MPS III).

– Problems in the eye area

– Problems in the ENT area

MPS patients often suffer from otitis media, which should consequently be treated with antibiotics. Both conductive hearing loss and sensorineural hearing loss are typical for some MPS patients. The first one can be treated well with grommets, the latter with hearing aids. That is perhaps the best way to delay aphasia in MPS patients with neurological problems.

Through the deposition of mucopolysaccharides in tongue, larynx and trachea, the respiratory tract is highly constricted, which can lead to pauses in breathing especially when sleeping, which in turn causes oxygen deficiency. Where appropriate, a surgical reduction of the nasal polyps and tonsils may help. Because of the deformed thorax or the enlarged liver and spleen, the respiratory system can be restricted, so that the lungs are ventilated inadequately causing pneumonia. Therefor an early breathing therapy is highly recommended.

If your child needs surgery for the first time or anaesthesia is required for thorough examinations, you certainly want to know what exactly happens. We try to provide insight into questions such as routine in the O.R. or specific problems occurring with MPS or similar diseases.

– What is meant by anaesthesia?

Anaesthesia is the loss of sensation such as feeling pain or touch. Local anaesthesia only sedates those parts that are treated or operated. Otherwise, the child is awake and knows what’s going on, unlike a general anaesthetic where the child is unconscious.
The doctor will explain the details of the clinical examination or surgery planned.

Before giving your consent for this planned procedure, don’t be afraid of asking as many questions as necessary to understand the situation clearly. Consult the anaesthesiologist, who is the one to decide which anaesthesia is the best for your child. If your child already had surgery, you may give the anaesthesiologist important information about your child, its disease and specific problems arising.

The child is anaesthesized – either using anaesthetic gas or intravenous injection. In some operations (e.g. in the abdominal region) an anaesthetic is used to sag the entire musculature (including respiratory muscles). In this case oxygen is given temporarily through a mask until the child is intubated. An instrument called “laryngoscope” is inserted through the mouth back into the throat by the anaesthesiologist in order to be able to view the larynx.

A respiratory tube is inserted into the trachea via larynx and the laryngoscope is pulled out. The tube needs to be attached to a machine supplying the lung with oxygen throughout the surgery.

– Risks of anaesthesia with MPS patients

It can be very difficult to remain the airways open sufficiently as is also the case whilst asleep. During anaesthesia the muscles sag causing an increased narrowing of the airways. These difficulties are normally avoided by inserting a tube through the larynx as already mentioned above, but with MPS patients this method can be very difficult. All these factors complicate the procedure for the anaesthesiologist to remain the airways open thus representing an increased general anaesthetic risk.

Many children with MPS or similar diseases have the following:

Children with breathing problems, heart or lung failure have difficulties in coping with anaesthesia and its after-effects. Almost all MPS children suffer from these problems.
Furthermore, it can be difficult to insert a cannula (needle) through the thickened skin or into the easy tearing veins.

What hast o be considered?

If your MPS child is going to have a surgery, it is advisable to have the surgery done in a clinic that already has experience with MPS children, even if this means that you may have to travel further. This is because your child may need to be connected to a ventilator for some time after an operation. In this case, an intensive care unit with trained pediatricians and nurses is absolutely necessary. The MPS company will be happy to advise you – send us an email office@mps-austria.at call us + 43-7249-47795 an.

Make sure that the anesthetist knows about your child’s illness and possible illness-related problems. There are ways to reduce the problems, such as: B. Avoiding specific anesthetics or stabilizing the neck / avoiding hyperextension of the head in patients with problems with the cervical spine. Intubation with a flexible endoscope has great advantages when dealing with difficult intubations.

The risk of anesthesia must always be weighed against the expected benefit of the planned surgery or examination.

Surgical intervention in MPS children as day patients is not advisable, even if it is just a routine operation.

It does not mean that your MPS child, especially when she is small, must experience these problems. Many children with MPS and similar illnesses have survived surgical procedures well and their quality of life has improved significantly as a result.

A bone marrow transplantation may alleviate the disease progression of some MPS types. This treatment is used among patients with M.Hurler and M. Maroteaux-Lamy. No improvements could be achieved in patients with other forms.

This treatment is associated with various problems:

A bone marrow transplantation is an invasive and burdensome measure and patients are advised to weigh the risk against the expected outcome.

A successful treatment doesn’t mean cure but alleviation of the natural progression of the disease:

A bone marrow transplantation should be received at an early age, best before the second year (by the 18th month).

Great expectations are placed on this treatment. But although years of research reaped initial major successes and first clinical studies could be carried out, the gene therapy is not yet available.

During gene therapy, copies of a normal gene have to be integrated into a carrier particle, the vector, in order to guarantee that the imported therapeutic genes are actually able to eliminate the cause of disease.

There are two fundamentally different approaches: the “in vivo method” and “the ex vivo method”. 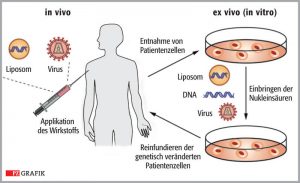 In the “in vivo” therapy, vector systems are used that have been developed from adenoviruses (adenoassociated viruses, AAV). . They have been modified so that they can enter the cells delivering the therapeutic DNA to the nucleus, but are not able to replicate themselves.

They are especially suitable for long-lived cells with low proliferation, e.g. nerve and muscle cells.

Click here for an article entitled “gene therapy is clinical practice” by Prof. Dr. Eduard Paschke, published in MPS – Falter 2014, where he looks at the topic in more detail and outlines several existing concepts and how they could be implemented (only available in German.

The principle of the enzyme replacement therapy is to provide the patients with the enzyme they are lacking by infusions at regular intervals. The problem is crossing the blood- brain barrier, so that an effect on the central nervous system is hardly possible at present.

The enzyme is produced via cell culture. For that Chinese hamster ovary (CHO) cells were used in former times. Today human skin fibroblasts or plant cells are being used. The cells are grown in big reactors (fermentors) under optimal growth conditions (temperature, pH value, oxygen etc.) To be able to produce the required enzyme, the cells have to be provided with the correct genetic information. This is done by transplanting those gene sections of the human gene responsible for the production of the desired enzyme into the cells of the tissue culture. Under certain circumstances these in this way modified so-called hamster cells then produce the desired enzyme.

At the end of the fermentation the enzyme has to be separated from the mixture of said other proteins. In the purified state it can be used as therapeutic agent.

The first enzyme produced in this way, which medication name is Aldurazyme (derived from alpha-L-iduronidase, the enzyme defect with MPS I), was approved by the European regulatory authorities on 10 June 2003.

A great breakthrough for the MPS research and a great hope for the patients, especially considering that it took 35 years from the first basic research in the laboratory of Prof. Elisabeth Neufeld / USA to it’s approval as a commercial drug. In clinical studies (phase I, II and III) patients received the enzyme in form of infusions. And along with these, significant improvements were seen in the area of joints (less joint stiffness), reduction of the enlarged liver and spleen and a positive influence of pauses in breathing during sleep. However, there is no indication that there are also effects on the storage in the brain.

Aldurazyme® was developed by BioMArin and Genzyme in a joint venture, with BioMarin as manufacturers and Genzyme as worldwide marketer. There are also approved medicines for MPS II, MPS VI and MPS IVA regarding ERT. Elaprase for MPS II was approved in 2006, Naglazyme for MPS VI in 2007 and Vimizim for MPS IVA in 2014.

Crossing the blood- brain barrier is still a big problem and is not sufficient when using traditional ERT. Therefore, there are new developments and studies to inject the enzyme directly into the brain and / or cerebrospinal fluid, which is tested in several clinical trials. More on this topic in the chapter research “New therapies for MPS“.

Society for MPS and related diseases