Hi, my name is Chris! 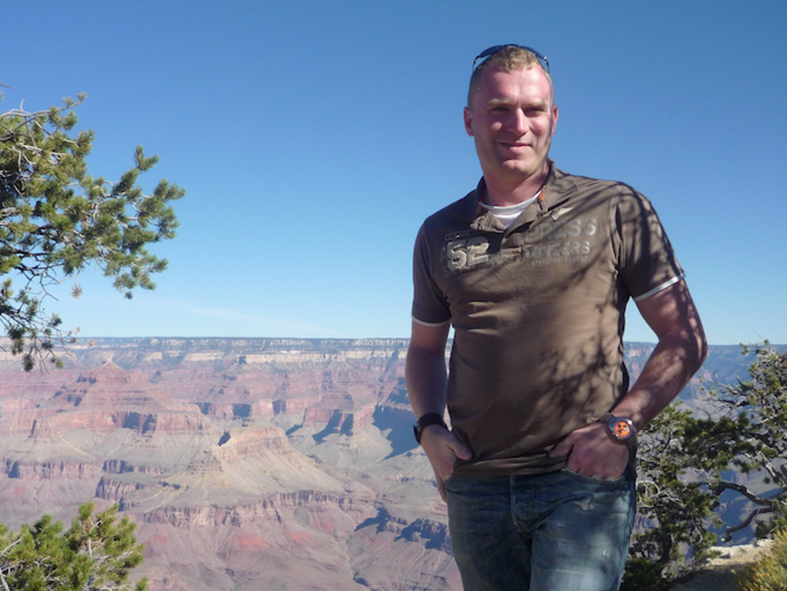 Hi, my name is Chris. I am 33 years old, I have MPS type I, Morbus Hurler Scheie and was diagnosed about three years ago.

Being diagnosed with 30 is quite unusual. Although I already had a bad hip in infancy, couldn’t make a fist and always got ill easily, the diagnosis was pretty late.

My mother went to many doctors with me and at some point they decided that “the boy is as he is and has to live his life that way” – what I have done so far. I was able to do all the things that were important for me – football, handball and fireman. There was no compromise on private and professional interests, no problems with education and career. I found my private happiness in my wife and my two children.

I owe it to my wife that I was diagnosed at all. We had an appointment at a doctor who does researches on hereditary diseases. After I had told her my complete medical history, she said that a profound medical examination was necessary to help me reach an advanced age. I guess you can imagine that it just swept me off my feet. A blood test was done and then there was silence for a few weeks. One day the telephone rang during work. It was my doctor who told me that she had received the results and something had been found but I wouldn’t die of it.

I was just so thrown that I couldn’t answer right away. The doctor referred me to the specialist, Dr. Lagler. During the initial consultation, Dr. Lagler expressed his suspicion of MPS type I, but made clear that only a urine test would provide clarity regarding the exact type. He also explained that my wife didn’t show any abnormality, meaning that our children wouldn’t develop MPS, because both parents must be cariers in order to pass it on to their children. I was relieved for the time being.

After the urine test Dr. Lagler’s suspicion was confirmed: MPS I and more examinations followed. At the beginning, I somehow blanked off the diagnoses, tried to ignore the whole thing, not to deal with it. But at one point I was getting curious and asked Dr. Internet, which was a big mistake. We all know that the internet is always providing the worst of the worst.

Some time later I started the enzyme replacement therapy in the hospital. Whoo!

What can I say: I tolerate the infusion very well. After I had been to hospital for the first infusions, I wanted my doctor to administer the infusion to me at home, which he denied. But fortunately my wife, who is a nurse, found an interim solution. It was of course no permanent solution, since the Regional Health Insurance obtained objections. Dr. Lagler supported the home therapy, which then was finally approved. Later I found out that I am lucky, for the approval of the home therapy is for many patients anything but granted.

Again, I let everything happen without researching the disease. I got the infusions and that was it – until I again searched the internet and came across the MPS Austrian society.

This was good, because for the first time I realized that I was not alone. Sometime later, I wrote an email to Michaela, which she immediately answered in her pleasant and compassionate way. Shortly after that we talked on the phone for almost an hour. Everybody who knows me knows that my private telephone calls are no longer than five minutes. Talking to Michaela felt good and I learned a lot about MPS and the society.

Michaela invited me to the MPS-Adult-Meeting in Gastein, which I accepted. The other participants stayed over night, I decided to join them as a day guest. It was a wonderful day with nice people. We talked a lot and we all had similar problems with the health insurance company, infusions and a lot of similar questions that were answered promptly. I really was happy to have decided to come to Gastein.

Home therapy is ideal, because I can get the infusions not only at home but at any place, like for example Tirol, Vienna, Cres and Maria Alm. Due to this flexibility I am not restricted in my work. I could make an individual arrangement with my employer for the infusion days. Since I mainly work on the laptop or telephone, I can do a lot at home. It doesn’t matter where I am while working, as long as there is electricity and internet access.

As you can see, life has been quite kind to me.

I am GREATFUL for all the people supporting me, whether in exchanging and sharing experiences or with medical investigations.